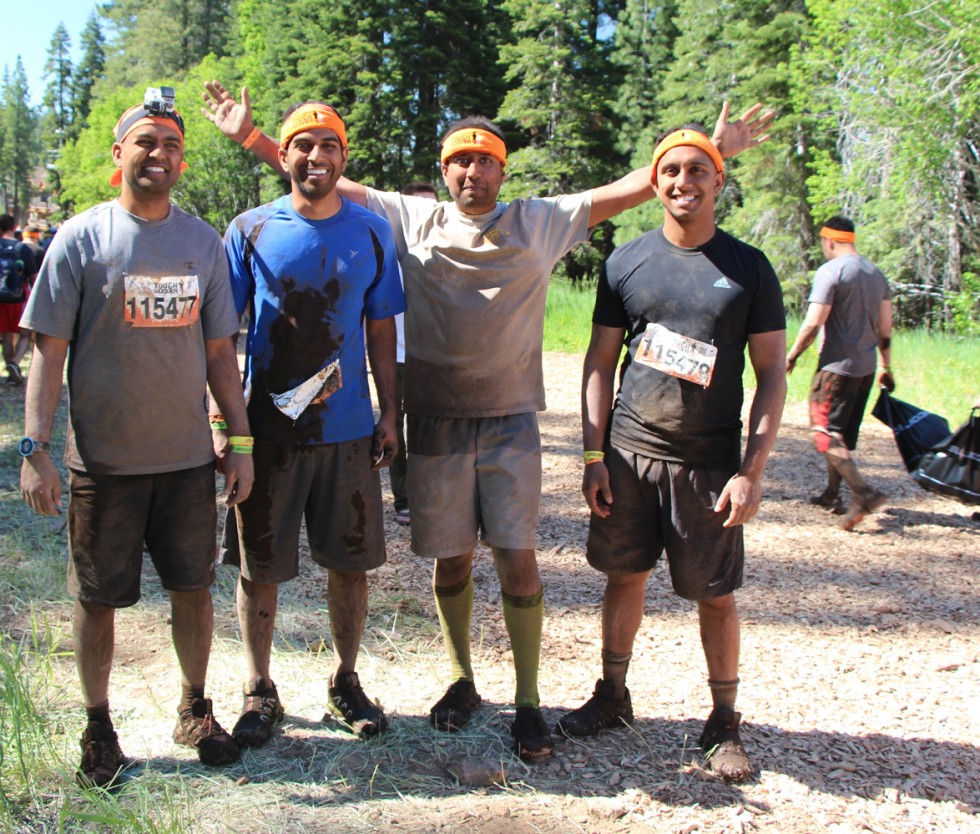 If you’ve heard of this long-distance obstacle course on steroids, you know it’s not for the faint of heart. Twelve miles peppered with challenges like an ice-filled pool, electrical shock, grown-up monkey bars, and vertical climbing walls, the event requires strength and stamina – especially when it’s based at Lake Tahoe’s North Star Ski Resort, with a beginning elevation of over 6,000 feet.

So when Jeevan Anandasakaran committed to taking on the challenge after seeing his brother complete it in 2014, he knew that his previously sedentary lifestyle as a computer programmer would need to be supplemented with regular workouts and a lot of running.

With the event scheduled for June, 2015, he started training seriously in January. “My brother had given me a goal of running six miles in an hour,” he says. “During that time, I read the book Born to Run and that was really inspiring. I got a running app called 5K to 10K that helped me get started.”

But he knew he needed more than just running, so in February he joined Elite Fitness, then called Yelm Bootcamp, to help with strength training. “Bootcamp was a place where there was actually somebody to tell you what to do so I didn’t have to think about it,” he says. “At one time in my life I had a personal trainer and it cost $450 a month. Here you get the same thing for a fraction of the cost. I’m still not the person who can motivate myself consistently to exercise so having a place to go where you’re on a schedule fixes that.”

In the beginning, running was really challenging. “Not having been a runner before, it’s a pretty painful experience,” says Jeevan. “You’re trying to get to six miles and in mile one, your calves hurt like crazy. There’s this transformation that your muscles go through. If you’ve been sitting down your whole life except for playing tennis, you have to get through that.”

He did get through it, and with one month to go until the event he entered his first ever 10K run in Seattle as a way to assess his fitness level. “That went surprisingly well,” he says. “I’d been training and running three miles was still a challenge, but I gave myself a week of recovery before the 10K. When the actual day came, I was incredibly surprised how easy that 6.2 miles was after a week of rest.”

Then he gave himself another challenge, this one to help prepare for the elevation gain he would experience on the course. “North Star has an incredible amount of vertical feet,” he explains. “It’s not like you’re just running twelve miles. Half of it is uphill on a very steep slope.” To simulate those conditions, he drove to Crystal Mountain Ski Resort and ran the three miles to the lodge at the top.

Finally, it was time for the Tough Mudder. Despite its daunting reputation, Jeevan says it’s actually a very supportive event. “Tough Mudder is not this highly competitive thing. It’s a group support system,” he maintains. “People do it because they want to challenge themselves. Nobody is holding them accountable except themselves and everybody helps each other through the obstacles. I did it with several members of my family, and we had a good team. It went a lot better than I would have thought.”

Following through on his commitment was the most important aspect of the event, he says. “It was about establishing credibility with myself. When I say I’m going to do something it’s not a joke. I put something out there and I have a choice to be somebody who actually does what they said they were going to do or not.”

In the months since, he’s continued to use Bootcamp for exercise, even though he currently doesn’t have such a large fitness goal in mind. “This is just who I am now,” he says. “It’s not a goal anymore, it’s just being healthy for life.”